Van Zandvliet wanted to make it big. The stadium would have to accommodate 60,000 to 75,000 people. He anticipated that this would be the place where not only Feyenoord would be playing its home games, but it would also be the venue for the Dutch National Team. He presented his ideas in an interview with the Nieuwe Rotterdamsche Courant of April 20th 1931. The reactions were not uniformly positive. Doubts were expressed loudly about the financial feasibility. Van Zandvliet took little notice of the criticism. At the members’ meeting of March 21st 1934, the plan was adopted with 28 votes against and 127 in favour 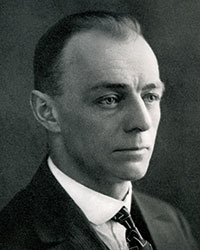 In March 1934, architects Brinkman and Van der Vlugt were invited by Van Zandvliet to draw up a design for a two-storey stadium. Simplicity and professionalism are at the heart of their designs, and superfluous embellishments don’t come into play. Typical Rotterdam.

In May 1934, study trips were made to various stadiums abroad, to gain ideas and benefit from the experiences of others. The Arsenal Stadium in Highbury made an especially big impression. In 1932 they had built a new grandstand over two stories, as Van Zandvliet had proposed for Rotterdam. In the following months, the architectural firm developed the plans.

At the end of 1934, Braat construction workshops in Rotterdam were contacted for advice on the design of the steel structure. The architects realised that a football match has two 45-minutes periods with a break in between. Drinks must be available for the visitors during the break. That is why buffets and toilets were built in between the steel trusses under both the upper and the lower bleachers. In addition, there must be areas, such as changing rooms and meeting rooms, an administration office, rooms for the referee, the doctor and the police, as well as four residences.

Van Zandvliet pushed ahead with this

Van Zandvliet focused his attention specifically on the progress and put a lot of effort into it. Whenever a construction drawing was ready, he immediately gave the order to start building. Even though the construction of the stadium was already well underway, the final design drawings had yet to be drafted. Because of this method of working, De Kuip was built at a record pace. On July 23rd 1936, ten months after the first stone was laid by Puck van Heel, the captain of both Feyenoord and the Dutch National Team, the stadium was completed. 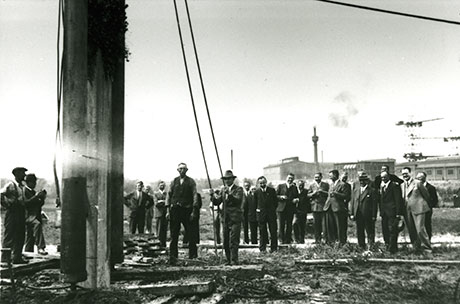 Ready to use or not?

De Kuip is ready for use, but couldn't be opened yet. The municipality had failed to build the access roads to the stadium. Meanwhile, in the autumn of 1936, Van Zandvliet invited 1,500 marines and unemployed people to De Kuip. He wanted to be sure that the stadium would meet the needs of future visitors. They were asked to take their seats on the double-decked bleachers. By megaphone, they were instructed to behave like supporters and cheer and jump as exuberantly as possible. The bleachers held up well. The men were rewarded with a drink and a cigar. 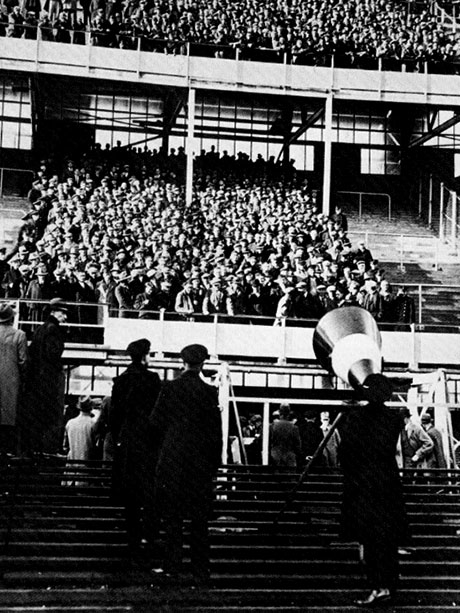 Six months later, Van Zandvliet himself took a seat in his new stadium, when the first match could finally be played on March 27th 1937. For the safety reasons, the opening was not a football match by the Dutch National Team but a friendly match, which would not draw the maximum number of spectators. In this way, parking spaces, entrances and buffets could be tested.

Still, 40,000 people came to see Feyenoord win 5-2 against Beerschot (Belgium). The Netherlands - Belgium match followed on May 2nd 1937. At this first international game, The Netherlands won 1-0 and De Kuip turned out to be a great success for international matches, and many matches followed after this date. The Dutch national team has played more than 100 matches in De Kuip. And no less than ten times has De Kuip hosted a final of the Europe Cup I, II and III. 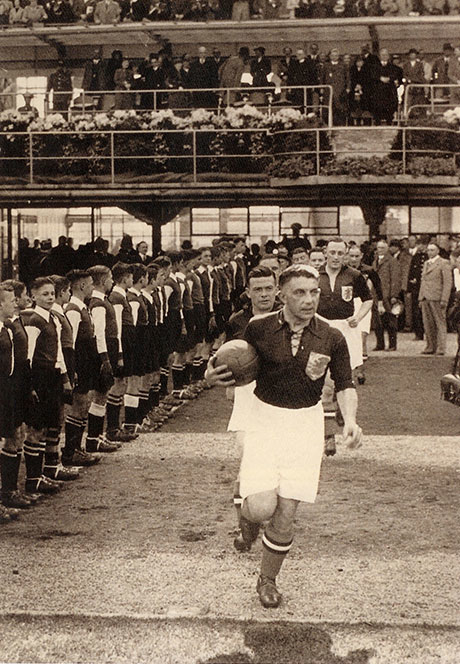 Right from the start, and in addition to football matches, De Kuip offered space for numerous other sports activities. For example, there were motocross races in De Kuip. There were also several athletics and gymnastics competitions. Worthy of note was the championship in 1993, which took place in Groningen. Because not all supporters were able to attend this match in Groningen, a large video screen was placed in De Kuip. More than 30,000 supporters were able to follow the finals live in their own Kuip.

De Kuip is known as the place where concert history was written. The first concert that was held at De Kuip was in 1978 and featured Bob Dylan. Bob Dylan's concert was a great success. There were no fewer than 52,000 visitors. After that, many international superstars entered the sacred ground of De Kuip, thrilling tens of thousands of fans. Popular Dutch artists have made themselves immortal here, including such names as: Marco Borsato, Rene Froger, Doe Maar and Kane. But there were also international giants, including: 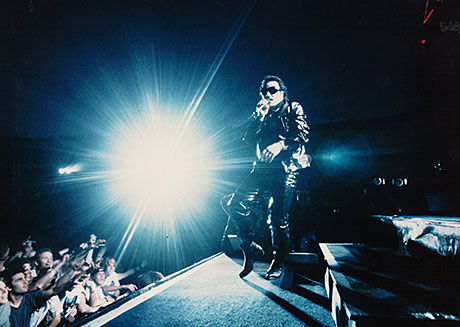 Despite the glory and the many successes in De Kuip, the stadium has been threatened with demolition three times. In 1941, there was a great need for high-grade steel for the war industry. De Kuip is built of this steel! As the stadium was threatened with liquidation, it seemed for a while that the steel for the industry had to be sourced from De Kuip. Luckily this didn't happen!

In 1984, the city of Rotterdam, like Amsterdam, wanted to bid on the organisation of the 1992 Olympic Games. The location of an Olympic Stadium was planned on the spot where De Kuip is located.

The last threat to De Kuip dates back to the early nineties. Due to concrete rot and erosion, De Kuip was no longer able to meet the quality requirements. Fortunately, the demolition plans were transformed into the final plan that resulted in a beautiful renovation. 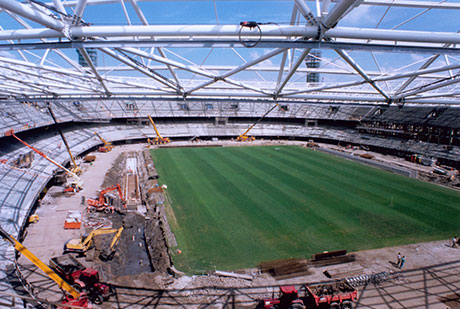 By 1994, the historic Feijenoord Stadium in Rotterdam was drastically outdated and was in need of a total renovation. In late 1993, an overall plan was presented that included an integrated tackling of all of the elements. It was decided to put the emphasis on multifunctionality. By expanding the range of activities, the stadium had to be able to operate not thirty, but at least three hundred days a year. The intensification of the use of the Feijenoord Stadium would improve the returns. The result: an historical, renovated stadium that is running at full speed.

The vision: a multifunctional Kuip

After eight intensive months of construction, the completely renovated Kuip was officially opened on Wednesday November 16th 1994. Prince Willem Alexander performed the opening ceremony before the start of the Netherlands - Czech Republic international game. The integrated design was very successful. With the new style Feijenoord Stadium, The Netherlands was thus able to offer a multifunctional, perfectly profitable accommodation. Business and private visitors know that De Kuip is the place to be, all year round and every day of the week.

Of course, the stadium itself has also undergone a radical facelift. The installation of an oval-shaped, column-free steel roof over the bleachers has created over 40,000 covered seats. In total, the stadium can accommodate 47,500 spectators during football matches. Furthermore, the usual fences around the pitch were replaced by a moat that is three metres deep. The existing steel and concrete construction, bleachers, stairs, landings, railings, sanitary and catering facilities have been completely renovated and expanded. All these improvements have resulted in a modern and safe stadium that offers every visitor an excellent view of the pitch and a wonderfully positive experience. Players and staff were also given new dressing rooms, and the press rooms were optimised

The complete real estate concept cost a total of 120 million guilders. Based on the results of the feasibility study, many potential investors were immediately convinced of the opportunities inherent in the new style Feijenoord Stadium.. The construction was interrupted many times for competitions, the cup final and a Pink Floyd concert. The entire construction project took around a total of eight months. Fortunately, the construction benefited from a long summer break in football, because of the World Cup in America.

The renovation project consisted of three phases: maintenance and renovation of the existing steel and concrete, building new facilities and expanding the possibilities of our stadium. The new facilities included:

After the renovation, the stadium also had 40 business units, each with a surface area of 40 m². These units are equipped with a toilet, a kitchen and a balcony with twelve chairs offering an excellent view of the pitch. There are 1,200 business seats above the units, and these seats, heated in winter, can be rented by companies. The seats give access to all Feyenoord's home games. Both the guests in the units as well as the guests sitting on the business seats have access to the Maas building before and after the match.